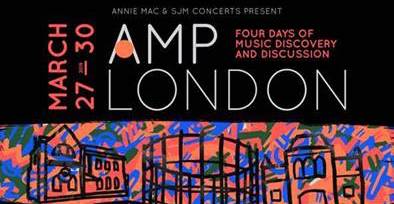 One of the UK’s foremost music tastemakers, Annie Mac, has announced the programme for Annie Mac Presents event in London this March.

The inaugural AMP LONDON will run from Wednesday 27 March to Saturday 30 March 2019 and will be curated by Annie Mac herself.

Over the course of four days, AMP LONDON will feature forty acts playing across fourteen different venues along with two days of talks and discussion held at Moth Club.

“AMP LONDON is an accumulation of what we’ve done for years.” says Annie “Prioritising music discovery and supporting bands and artists, AMP LONDON aims to celebrate and consolidate London’s globally renowned music scene, inspire conversations around music, and, ultimately create something that is culturally impactful and invigorating for music lovers of multiple genres.”

A closing party at The Hackney Empire (proceeds from which will be donated to London based charity, Art Against Knives). Both the Oval Space and The Hackney Empire shows feature a secret star-studded line-up to be revealed in March.

Tickets for AMP LONDON go on general sale Friday 1 February at 9am and will be available to purchase here. The full line-up is available here.