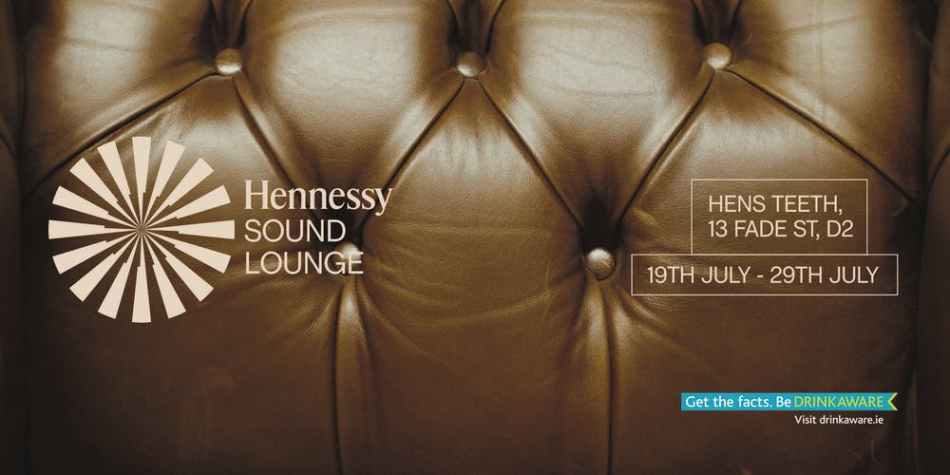 Cork musician and music programmer Aisling O’Riordan has been collecting records of alternative, soul, blues and hip-hop genres from her early teens. Believing that she will never have too many records is surely the sign of an obsession, but one that can attest to her love for music and putting on shows

Ahead of her feature at the Hennessy Sound Lounge, which features a custom-crafted sound system by Toby Hatchett, music lovers will gain an insight into seven of Ireland’s most avid vinyl collectors and their collections.. RobMoro had a quick chat with Aisling about being a musician, a music programmer for Quarter Block Party, and DJ.

As someone who is involved in the music scene and spinning some of your own collection at Hennessy Sound Lounge, being influenced by the music you play to the audiences, how important is music discovery from your personal perspective? The joy, curiosity, and the bond people share over tracks and albums?

“Music discovery is pretty essential and something I spend a lot of my time on. The way I’ve discovered music hasn’t really changed over the years but definitely has become easier with the amount we can access online. When I was a teenager I looked at who the bands I was listening to were touring with or who they were influenced by and now I still do the same thing. I’m also lucky to be surrounded by a lot of brilliant people with great tastes and find a lot of things through them. It’s a very special thing to share a bond with people through an album. I remember when ‘Lemonade’ came out a few years ago and every person in my house was singing it all the time. We literally sat around the kitchen table for a week listening to it. It was quite intense but also one of the best weeks.”

Do you have a particular moment where you heard a piece of music that really influenced your listening and playing style over the years?

“I don’t think there’s one particular moment but when I finished college I worked in the Pavilion (a music venue in Cork) until it closed down in July 2014. Everyone there from the DJs to the owners to the bar staff were obsessed with music and it was a great thing to be around. I was constantly finding amazing new music from the DJs and the bands that played there. Working on 3-5 shows a week, music really seeps into your brain in a good way.”

Speaking of The Pavilion, you have been a regular part in putting together events and shows in Cork through different spaces and sizes over the years, could you elaborate a bit on your time there bringing a mix of styles and influences to Cork through your own personal perspective?”

“Well after The Pavilion closed down myself and Caoilian Sherlock started running shows together under Southern Hospitality Board until the end of 2016. We got to bring some incredible people over including – MNDSGN, Peanut Butter Wolf, Breakbeat Lou, Rozi Plain, Amen Dunes and also showcase the incredible bands and musicians we were surrounded by – The Altered Hours, Girl Band, Pillow Queens, Sissy and loads more!”

Putting on shows in your town or city isn’t always an easy task, what was your first experience like and what was the best advice or lesson you had at the beginning?

“Well my first experience of putting on shows were all ages gigs when I was 16/17 and it was a disaster – the bands were unreal but the people just didn’t come (mainly because I had no idea what I was doing). My advice is to start off small and learn how to put on shows well from there – make sure you know how to get good coverage for the show, that it’s in every single listings that it can be, that the band are happy on the night (without them taking the piss) and don’t be afraid to ask people who’ve been putting on shows longer than you for advice!”

Part of your portfolio is Quarter Block Party, in your own words how would describe its inception and success?

“Quarter Block Party started pretty soon after The Pavilion closed down also. It is a collaboration between myself, Ruari Donovan, Eszter Nemethi and Caoilian Sherlock (and countless other amazing people who help make the festival happen). Our first festival was in February 2015 and we’ve done a festival every year since. The whole idea was to try and make a festival that represented all of our interests and mediums – music, dance, performance, social engagement – and present it in a part of the city that there wasn’t much happening in. It’s been an incredible and tough four years and in terms of its success? I’m not sure – we work really hard to deliver a lovely, fun and thought-provoking weekend and I think it’s what people want and need at the start of each February!”

Looking ahead towards the event next week, are you looking forward to the aesthetic and atmosphere that will be installed for the event along with the rest of the line-up?

“I am very excited and honoured to be asked to be a part of the Hennessy Sound Lounge. It’s not every day that you get to sit and listen to your favourite records on a custom built sound system and chat to people about it. It’s a really great idea that Hennessy and This Greedy Pig put together and I’m more than happy to bring a bag of records along!”

Another key aspect to this event will be what all the guests will be playing from their personal collections. For you, what is the best part of buying records? Do you have any favourite spots? Also what records did you purchase recently that readers should check out?

“It’s definitely the search – going into a record shop with a vague idea of what you’re looking for and then finding everything else you’ve ever wanted but that. I love Plugd, Bunker Vinyl and MusizZone in Cork. I loved hitting up Elastic Witch when it existed in Dublin and The Record Spot always has some gems. I recently got to visit Asheville, North Carolina and there’s an incredible shop there called Harvest Records which I would urge anyone passing through to check out!”

Tickets costing only €8 plus booking fee include a tasting masterclass with Hennessy Brand Ambassador Paul Tuohy and are available through Eventbrite. There will only be 12 tickets per session.