Indie Synth/Pop from Kilkenny Neon Wolf have had a busy year gigging with support slots with Stereophonics, Vaccines, Feeder,

The band will perform their own headline show at The Academy, 2 – Friday 9 December. Tickets will go on sale this Thursday at 10am.

The Bowery have just announced that Badly Drawn Boy has sold out Sunday 18 December but the good news is a second date has been added on Monday 19 December along with support act for both shows Jack O Rourke.

These will be Badly Drawn Boy’s first Dublin shows in almost 10 years. After some great festival shows over the summer,

Tickets for the shows are priced from €22.90 plus booking free are on sale now available from Ticketmaster outlets and online at www.ticketmaster.ie.

Dolittle will be bringing Rozi Plain to The Workman’s Club on Tuesday, 13 December.

Tickets €22.00 includes booking fee go on sale Friday 21 October at 10am from Ticketmaster 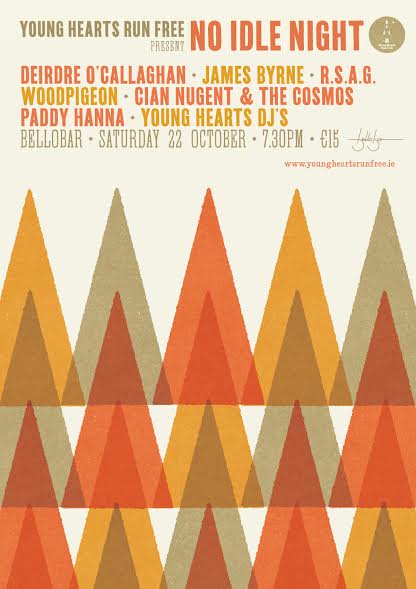 Young Heart Run Free presents an eclectic night featuring; a radio listening event in appreciation of Anne Briggs (in association with A Falling Tree productions), photographer Deirdre O’Callaghan in conversation with drummers James Byrne (Any Other City) and Jeremy Hickey (R.S.A.G.) about her most recent book The Drum Thing, with a live set by R.S.A.G., and performances by Woodpigeon, full band shows by Cian Nugent & the Cosmos, and Paddy Hanna, Young Hearts DJ’s and more.

They will be joined on the tour by Vanna and Fit For A King.

The IYMAs programme will finish with a youth music festival in the Aviva Stadium on Saturday 22 April 2017. Last year’s event featured over thirty-six up and coming acts play across two stages, a large educational hub for anyone attending to join with workshops by BIMM lecturers covering topics such as song writing, drums and lots more. This event is open to all to attend and tickets are now available here from Eventbrite priced €20 including booking fee.

Tickets priced at €25 plus booking. Tickets go on sale this Wednesday at 10am fromwww.set.ie and Rollercoaster Records. Doors 8pm.

Due to demand Brian Deady has added a second show at Whelan’s on Friday 28th October. His originally scheduled show on Thursday 27 October is now SOLD OUT.

Tickets for the extra date are priced €17.50 incl. booking fee and on sale now from Ticketmaster outlets and online at www.ticketmaster.ie

Bell X1 have announced a headline date at The Olympia Theatre, Dublin on Friday 20 January 2017

Tickets priced €33 inclusive of booking fee and restoration levy go on sale at 9am this Friday, 21 October from Ticketmaster outlets and www.ticketmaster.ie

Update: Due to demand Bell X1 have announced a second date at The Olympia Theatre, Dublin on Saturday 21 January 2016.

Tickets will go on sale this Friday at 9am from €20.