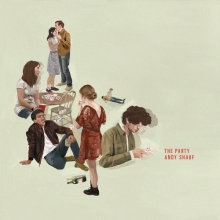 “The Party” is an album that is conceptual as the title might suggest, about a party. Opening on the second LP by Canadian musician, Andy Shauf, is ‘The Magician’.  Imagine a flow of people arriving at party somewhere, maybe a small venue, someone’s flat, as people stream in under the score of the playing musician.  It describes a few nervous characters, the pulse racing later as the electric guitar builds small riffs under the hummed tones of Shauf’s voice.

The slow jazz tempo of ‘Early to the Party’ defines the scene a little more. A few guests stroll up the drive, early to this event, it sets the tone of a party that is basking in evening sunshine.

‘Quite Like You’ has more swing, as Jimmy sits stoned in the room. The narrative continues much like this through the album.  A Rear Window styled viewpoint of Shauf observing the little things and questioning the motives of those around him.  The Brit-pop style is like mellowed Supergrass or Gaz Coombes’ record with a little more flourish to be breezy.

Not quite as jovial as Gilbert O’Sullivan, but a more Paul Simon.  it’s the 80s piano twang, the jazz kit drums, and self-depreciating lyrics of Shauf that bring the record through. ‘The Worst In You’ is a tad bit Weezer like, but that is a good thing.  This record has a ‘Island in the Sun’ vibe anyway. Just like the character pictured in the album’s tracks, you will fall in and out of love with “The Party”.

“The Party” by Andy Shauf is out now on ANTI.